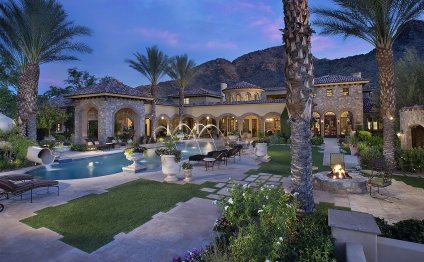 Phoenix is a lesson in housing abuse. From boom to bust, to recovery to relapse, Phoenix housing is forever rising and falling, and now it is falling again. The rest of the nation should take notice.

"We tend to be a little bit more extreme, more volatile than the rest of the country, but usually if a trend is going to occur, it occurs first in the outer suburbs of Phoenix and then in the middle of Phoenix and then in the rest of the country, " said Mike Orr, director of the Center for Real Estate Theory and Practice at Arizona State University's W.P. Carey School of Business.

From 2000 to 2006, builders descended on Phoenix. The number of housing starts nearly doubled, and the median home price more than doubled. The population did not increase nearly that much, nor did the average income of a Phoenix resident. It was investors, looking to flip these homes for a quick buck, and buoyed by cheap easy credit, who drove construction and prices.

A view of Phoenix at dusk

Then it all came crashing down. Home prices fell 56 percent from their peak in the summer of 2006, bottoming out in 2011, according to the S&P/Case-Shiller Home Price Index. Foreclosures skyrocketed, and a new set of investors moved in to take advantage of the distress. They bought not to flip, but to rent, and they drove prices back up 45 percent from the bottom.

The trouble now is they priced themselves out of the market and left Phoenix housing to regular, mortgage-dependent buyers. These buyers are faced with tighter credit standards and a still recovering economy.

"I think we have a lot of buyers on the fence right now, who are saying, 'I want to buy something, I just don't feel real compelled to do it right now, I just want to see how things play out, '" said Bob Hertzog, a Phoenix real estate agent. "There are a ton of fence-sitters out there."

Hertzog's clients, Julia and Mike Lersch, were ready to get off the fence in March and buy a home closer to their daughter's school. They put their north Phoenix home on the market, listing it at $300, 000.

"Our real estate agent said it's like fishing. You throw it in, and it's like how deep do you need to get before it hits the fish?" said Julia.

After 107 days and several price drops, they still had no bites, so they pulled it off the market.

"Right now demand is very weak for a number of reasons, " said Orr.

The reasons are much like in the rest of the nation: Potential buyers are still repairing their credit after the foreclosure crisis. Others do not have enough equity in their current homes to sell and move up. Demand is also weak because credit is tighter, prices are high and younger Americans are not buying.

The Phoenix market has been cold for a long time, " said John Burns of John Burns Real Estate Consulting. "Fifty percent of builders last month dropped prices, including incentives. Demand is weak and weakening. Supply and affordability though is fine."

Affordability may be better than it was during the height of the housing boom, but the buyer mindset has clearly changed.

"They're still looking at it from a distressed property mindset, that they should be getting this great deal, whereas a lot of the folks like us that have been maintaining our properties well, we're not just willing to give them away, " said Mike Lersch.

Meanwhile builders are slowly coming back into play in Phoenix. Taylor Morrison and Pulte are some of the bigger players. Single-family building permits are still barely one-sixth of what they were in 2006, but the new homes are getting more attention than even recent builds, at least according to the Lersch's.

"We have a lot of new builds finally going in, " said Mike Lersch. "So we're really getting competition."

His wife, Julia, however, is concerned that there is not enough demand to support these new homes, as well as existing homes like hers that are slowly coming on to the market. There is also concern that investors in single-family rentals will begin to sell their properties, now that prices are higher.

The median list price for Phoenix-Mesa location domiciles is $244, 900, up 14% from same month last year, in accordance with…