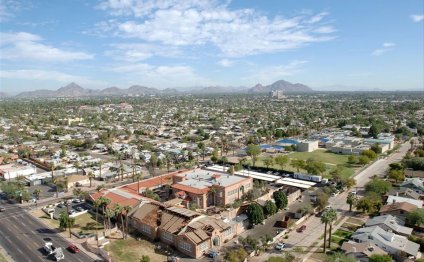 "Gober takes Phoenix beyond the role of 'straw man' for urban critics and treats this rapidly growing metropolis as a phenomenon worthy of thorough analysis."—Journal of Regional ScienceInhabitants of Phoenix tend to think small but live big. They feel connected to individual neighborhoods and communities but drive farther to get to work, feel the effects of the regional heat island, and depend in part for their water on snow packs in Wyoming. In Metropolitan Phoenix, Patricia Gober explores the efforts to build a sustainable desert city in the face of environmental uncertainty, rapid growth, and increasing social diversity.

Metropolitan Phoenix chronicles the burgeoning of this desert community, including the audacious decisions that created a metropolis of 3.6 million people in a harsh and demanding physical setting. From the prehistoric Hohokam, who constructed a thousand miles of irrigation canals, to the Euro-American farmers, who converted the dryland river valley into an agricultural paradise at the end of the nineteenth century, Gober stresses the sense of beginning again and building anew that has been deeply embedded in wave after wave of human migration to the region. In the early twentieth century, the so-called health seekers—asthmatics, arthritis and tuberculosis sufferers—arrived with the hope of leading more vigorous lives in the warm desert climate, while the postwar period drew veterans and their families to the region to work in emerging electronics and defense industries. Most recently, a new generation of elderly, seeking "active retirement, " has settled into planned retirement communities on the perimeter of the city.

Metropolitan Phoenix also tackles the future of the city. The passage of a recent transportation initiative, efforts to create a biotechnology incubator, and growing publicity about water shortages and school funding have placed Phoenix at a crossroads, forcing its citizens to grapple with the issues of social equity, environmental quality, and economic security. Gober argues that given Phoenix's dramatic population growth and enormous capacity for change, it can become a prototype for twenty-first-century urbanization, reconnecting with its desert setting and building a multifaceted sense of identity that encompasses the entire metropolitan community.